The project in a nutshell

Humans communicate using not only language, but the gestures that accompany it. Gestures are movements of the hands and body often paired with speech, and emerging research suggests that they are integrated with the grammar of language. Hence, the study of language is incomplete without the study of gesture. While gesture is universal, individual gestures vary across languages.

In recent years gestures have been a topic of much interest in formal linguistics, especially with respect to their semantic and pragmatic contribution (Ebert and Ebert 2014; Schlenker 2018; Esipova 2019). Since a consistent observation within this literature is that the semantic content of gestures can be integrated into the meaning of spoken utterances, one way to explain this semantic integration is to treat them as part of the grammar. Thus, in principle,  gestures should be assumed to be able to contribute at different grammatical levels (e.g., syntactic, phonological, semantic).

For instance, the hypothesis by which gesture can participate in semantic relations because they can appear in syntactic representation has caught the attention of some scholars (Jouitteau 2004, Sailor and Colasanti 2020, Colasanti forthcoming). In particular, since gestures are performed with the same articulators as sign languages (e.g. hands, eyebrows), this would mean that, assuming a generative model of grammar, syntactic features are externalised at the PF interface as gesture (visual-gestural modality) rather than speech (auditory modality); i.e., syntax is modality-blind (see Esipova 2019; Sailor and Colasanti 2020).

Empirically drawing from the gesture-heavy languages spoken in southern Italy, GestuGram aims to develop a grammar of gesture. 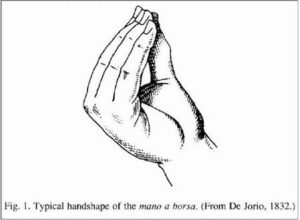 Ebert, Cornelia, and Christian Ebert. 2014. Gestures, demonstratives, and the attributive/referential distinction. Talk given at Semantics and Philosophy in Europe (SPE 7), Humboldt-Universität zu Berlin.

Esipova, Maria. 2019b. Composition and projection in speech and gesture. Doctoral Dissertation, NYU.